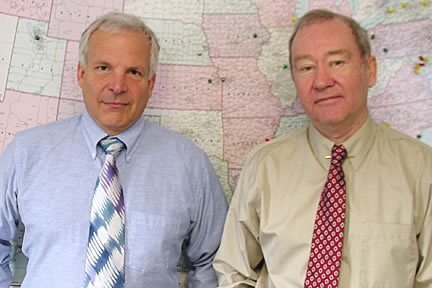 NORWALK — JayStar Group has been flying under the radar for the past 10 years, but is starting to make a name for itself in today’s struggling economy.

JayStar Group is a Norwalk-based company that aims to provide unions of all sizes with a comprehensive suite of practical, proven solutions to meet the day-to-day challenges of their Information Systems requirements.

“We provide custom software and regulatory compliance services and consulting,” President David Roger said, adding that “unions have complicated regulations they have to adhere to with the Department of US Labor. JayStar Group stands out because of two core elements of their company: customer service and a work place where their employees can realize their full potential,” Roger said. “These two elements have helped us stand out over the years against competition, whether locally or nationally,” he added. “We pride ourselves on our customer service,” Roger said. “Nobody here watches the clock,” said company CEO Robert Stevenson. “For every person who works here, we have a person who answers the phones.”

The company has also avoided some of the undesirable elements of modern business, such as impersonal service provided by machines or emails, automated messages, and patronizing or unresponsive support.

“Our aim, rather, is to maximize modern technology as a tool, while leaving the human element in place when dealing with our customers,” according to a statement on the company’s website.

“We don’t really have to have an office presence,” Roger said. “Most of what we can do we can do using today’s technology.”

All these techniques have made the company a leader in its field and brought in hundreds of customers, even on the national scale, ranging from the East Coast and reaching into the Midwest and West Coast.
The headquarters for JayStar Group is located on East Avenue in Norwalk, however.

“It’s a source of pride to be here in Norwalk,” Roger said. “We are Norwalk-owned and Norwalk-grown.” They are also in the planning stages of opening of an office in Washington, DC, due to the growing customer base in the city, according to the website.

“The growing part of our business is in the nation’s capital,” Stevenson said. Company officials are excited about the prospects of growth in the future.