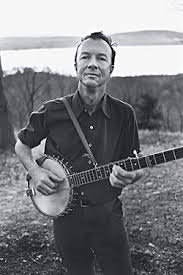 Pete Seeger died today. Pete Seeger was an individual who seemed almost immortal to me. I started playing folk guitar when I was about 14 years old and later sang in a folk group. A lot of the songs I sang were written by Pete. A few years ago I acquired a 1964 long neck “Pete Seeger” banjo, the real article made by Vega of Boston with a handwritten yellow label inside saying “Pete Seeger”. Pete lived not too far from here so I sent a letter to him asking if he would sign my banjo, never really expecting any reply. I did get a reply from Pete’s wife, Toshi. The letter was addressed and handwritten by Toshi and there was also a “form letter” from Pete saying that he found it hard to answer the thousands of letters he received on an individual basis. Toshi suggested I come to the Clearwater coffee house and Pete might find time to sign the banjo. I never did make it to concerts that he attended there but I still have the letter (and of course the banjo). Apart from the foregoing personal memories, I also wanted to stress in this blog that Pete Seeger was a staunch supporter of unions and wrote many songs in that vein. In that respect he was following another great folk singer – Woody Guthrie.

Pete Seeger was politically a controversial personality and whether you agreed with him or not he was a man of great principles and was unafraid to voice his opinions – usually in a peaceful way through his songs. In a day and age where our politicians’ principles seem to be in ever decline and even blatantly up for sale in some cases, we should pause and consider that this country has lost a great American, and a great friend to unions.

Our partnership with JayStar will be key in managing our union. We selected them so that we can improve the efficiency of our back-office operations and let us spend more time focusing on meeting the … END_OF_DOCUMENT_TOKEN_TO_BE_REPLACED

JayStar’s invaluable services have consistently enabled the AFL-CIO to meet DOL filing requirements in a timely manner. They have maintained true professionalism, while still providing a unique “perso… END_OF_DOCUMENT_TOKEN_TO_BE_REPLACED

JayStar has the best approach to LM-2 preparation that I have seen. The team has professionals highly trained in technology, accounting and LM-2 regulations. Their system provides you with itemization… END_OF_DOCUMENT_TOKEN_TO_BE_REPLACED

I am happy to recommend JayStar.  Our experience with them has been a completely positive one.  They re-did our entire dues processing system (we have approx 75,000 dues paying members) and implemen… END_OF_DOCUMENT_TOKEN_TO_BE_REPLACED

Marianne DelBalzoControllerUnited Mine Workers of America